Hot Roots is a creative concoction born out of a group of unusual suspects representing city life, innovation, food sustainability, art and entrepreneurship - bringing together a fusion and celebration of 'hot roots' in new ways.

The Organic Growth of an idea…
In December of 2012, Pramilla Ramdahani, Executive Director of the Community Innovation Lab, approached Carol (at the Table) with an idea to co-create 'Oshawa's biggest holiday salad', with a goal of generating some buzz downtown around fresh food while donating some of the funds raised to a local charity (in 2013). We had two weeks to spin this salad. While Carol was pondering possible gourmet scenarios, Pramilla fired off an invite to two other key movers and shakers on her list, Sally Grande (DurhamVeg founder) and David Tuley at the City of Oshawa.

It was almost a perfect alignment of the food innovation gods (divas) last year and going forward. Sally (who is co-chair of DurhamVeg and an artist in her other life -Creative Carrot) partnered with another downtown 'mover and shaker', Angela Mittoni, Downtown Oshawa's BIA Coordinator.

Reflecting Afro-Caribbean culture in cuisine: the benefits
February is designated as Black History Month. What if everyday, in small ways, we recalled the heritage and cultures of Afro-Caribbean peoples in some basic, crucial way... such as in our food? What if such a gesture also brought attention and prosperity to our town?

Support from Mexico Lindo (2013) and The Table (2014)
Many thanks to Mexico Lindo in 2013 and to Carol at The Table in 2014 for allowing us to fashion a "command central" at their restaurants and for making this event a success two years in a row!

2014 - Support from the Toronto Vegetarian Association and the  Multicultural Council of Oshawa/Durham
As we approached our planning for the 2014 HotRoots Festival, the local MCOD expressed interest in being involved. A wonderful dance evening evolved with MCOD's support. In addition, several members of the MCOD Board volunteered at the "Soup Stations" sprinkled around the City. In 2014, the scope of the event widened and we were taking "soup to the people" and into workplaces in the downtown core. DurhamVeg, a group within The Toronto Vegetarian Association, provided volunteers everyday for the 5-day festival, as well as funding.


Many Thanks to Oshawa City Hall and Business Improvement Area Association
Kudos to the BIA's Angela Mittoni for her vigilance as a planner, contest supervisor, event coordinator and photographer as well!  The City supported this event from the start. Many thanks to David Tuley for his encouragement.


Want to participate as a sponsor, volunteer, media, or join us in this exciting initiative?
Contact Angela at 905 576 7606 or email Sally at hotrootsfestival "at" gmail "dot" com. 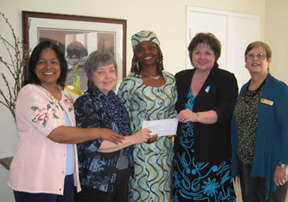